The song is a follow-up to their first single “Keeping Up With Jacob”, and will serve as a harbinger to their upcoming debut EP produced by songwriter, multi-instrumentalist and front for the indie band Catholic Action, Chris McCrory.

For their part, Peter Cat make pop music that in their words contains “a bit of oddness” that pulls from a variety of sources across the musical spectrum, from the push-pull glittery boogie beat of seventies glam-rock to the arty and urbane music of Neil Hannon and Jarvis Cocker. There’s even a bit of David Sylvian in the vocals, to my ears.

The oddness in their music perhaps is connected to the origin of their name; the jazz club founded in 1978 by magical realist author Haruki Murakami in Tokyo of the same name – Peter Cat . It’s not odd to name your band after a favourite author’s endeavour, of course. But considering the subject matter of Murakami’s novels like trans-dimensional talking cats, the duo have hitched their wagon to the eccentric and surrealistic. 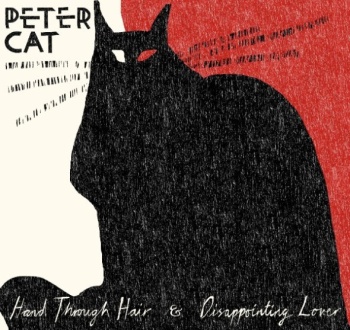 These ingredients are evident in this song and certainly in the video for it, while still touching on and exemplifying what pop music should be; familiar terrain to welcome the listener, complete with provoking an impulse to dance! But there’s a lot that’s unfamiliar here too, which is what makes “Hand Through Hair” unique. It takes some unexpected turns to surprise and delight.

Maybe that has to do with the contrast between genres that the band are playing with in their efforts to bridge the pop music of the past with that of the present. Either way, “Hand Through Hair” has another trait that is essential to pop music beyond all of that. It’s fun. What with all of the other elements at work here, this is the most important.

Peter Cat will be playing dates in Scotland this week, drifting southward during the summer and into the fall, UK readers.

Get the full dates right here.

I am a writer, music fan, and Dad living in the Greater Vancouver area, British Columbia, Canada. View all posts by Rob Jones

This site uses Akismet to reduce spam. Learn how your comment data is processed.